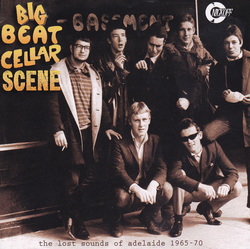 A collection of lost Adelaide recordings from the years 1965-1970

Many people remain unaware of large portions of Adelaide's rich cultural history these days. Most people remain willing and more than eager to write the city off without truly exploring or understanding what goes on here. Few people can justify their claim with any real investigative proof. Even fewer people immerse themselves in or attempt to uncover the heritage of our pop & beat culture of the 60’s & 70’s, a scene which never really exploded onto the national stage due to lack of infrastructure & support behind the talent of the day. A situation that is woefully echoed around town today. Record collector Nick Giannakakos says of Adelaide’s 60’s scene;

"Everyone raves about bands from Melbourne and Sydney but I think we had better bands here, it's just that no one acknowledged them!"In light of that notion Nick set about compiling this collection of never before released tracks, a process through which Nickoff records

was born.  Some of the recordings feature musicians who later went on to prominence on the world scene such as Rick Morrison from the Masters Apprentices who appears on the track I’m Going Back by Machine Gun Kelly’s Rejects (which he doesn’t remember recording!). While many of the tracks are bursting with talent and are drenched in the prevailing musical flavor of the time, none of the names have really been distilled into an archetype of state pride or stored in the collective archives of our psyche.

Many of the tracks were recorded at Nationwide Studios which stood next to where the Worldsend hotel is on Hindley st. which was the tracking booth of choice for Adelaide's beat musicians throughout the late 60’s and early 70’s.Infact Nationwide was so good at producing records that master tapes from Melbourne, Brisbane & Tasmania were sent here for pressing! The studio building is now demolished, however Nick managed to find and transfer a number of the recordings to digital from the original acetate or reel to reel tapes which has manifested as the Big Beat Cellar Scene CD.


In order to prevent the artists and their work from passing on into obscurity and to celebrate our city’s rich though hazy cultural heritage Nick has been liaising with personalities that were involved in the Adelaide music scene during the 60's and 70's and preciously collecting any recordings of note that he can discover. The  recordings on Big beat Celar Scene, he requisitioned from the musicians that made them and finally brought them to the light of day after nearly 4 decades of literally sitting in wardrobes or garages. Compiling the songs onto a cd helped Nick fulfill his quest to;

"make people aware of the talent that we had that was probably neglected back in the day, alot of people don't realise the talent that we had."
He has also unlocked a treasure trove of posters, photographs, memorabilia & magazines pending release which document that era of Adelaide's music history. Including a collection of the early days of arguably Adelaide’s most famous band the Masters Apprentices. Keep an eye on Nickoff records for future releases, including Big Beat Cellar Scene II which is due for release later this year.

The record evokes an era of bustling scenesters furrowing around town on their way to a happening and carefree beatnicks cruising old cars through the Adelaide hills with a guitar in the back. Then, as now people would gather in town to socialise and bring themselves together into the scene. Although those days town looked very different. In a time when a pack of cigarettes cost 10 cents, the main hang outs in Adelaide during the 60's were the Cellar, beneath what is now the Jade Monkey, the Beat Basement on Rundle St. now SIC, the 20+ club on Grote st. (in the big red brick building now housing a Chinese grocery store), Big Daddy's in Gawler Place and the Railway Institute hall which was a dance hall attached to a public bath house behind the railway station on North terrace where the festival centre now stands.

Poignantly the record conveys the hopes and dreams, love & search for life expressed musically by young kids which really has not changed over the years, just the form in which it is voiced. This is an important record to put Adelaide into a historical context. For to be a creative city we must be able to draw upon our roots and this cd is a big link to fill in the missing parts of the bigger picture for someone searching for the spirit of Adelaide.

Bands like the Masters Apprentices, Blues Rags’n Hollers, Southern Gentlemen, Dust N’ Ashes, Blues Syndicate, The Vikings/Why 4, the Others, Sounds of Silence, the Bentbeaks, the Third Party, the Chosen few, the Harts, Syssys, The Hergs, D-coys, Inkase, James Taylor move, The Bucket, Five Sided Circle amongst many others in a thriving scene made their presence felt.

Some were lucky enough to release one or maybe two 45’s at best, however the emergence of a number of independent recording facilities enabled many more to record demos and tracks to mime to on local tv music shows like Action or In time.

This is what we have here, hidden away for over 40 years, the fruits of that youthful energy hopefully getting some recognition not afforded them at that time.”